by Ray Robinson |Author Events|May 30
Editor's Corner Podcast - How Editors Can Hel... How to Find A Book Publisher

W.L. Hoffman & “The Soulstealer War” series at BookExpo and BookCon 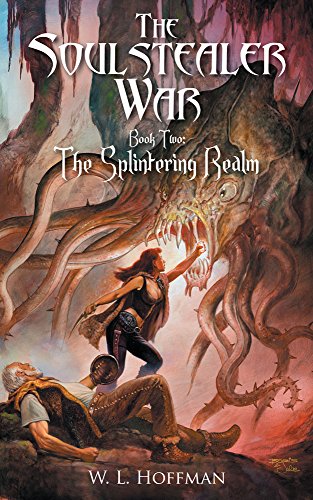 “The Soulstealer War: The Splintering Realm” continues author W.L. Hoffman’s fantasy and sci-fi novels, chronicling the adventures of his reluctant wizard - Kenneth McNary - across the magical Realm of Weir.

Hoffman is excited to once again appear at Book Expo and Book Con in New York City, and to interact with fans at Booth 1343 throughout the 4-day event.

“The Splintering Realm,” the next epic Fantasy and Sci-Fi installment in “The Soulstealer War” novels is finally available. Author W.L. Hoffman continues the adventures of his reluctant wizard - Kenneth McNary - across the magical Realm of Weir, and now into the exciting reality of Book Expo / Book Con at the Javits Center in New York City. Booth 1343.

When asked about the event, Hoffman explained:

“I’m thrilled to return to Book Expo, which rolls into Book Con. As an author, this is the place to make connections and let the synergies fly … it’s the show of shows for publishers and book buyers, and it includes a savory hodgepodge of librarians, reviewers, writers, film makers, game designers, marketing groups, and readers of all genres!”

Hoffman has previously been quoted on his favorite aspects of this series:

“Fantasy books should entertain, but I hope mine will also leave readers wondering about reality. What is the nature of human existence beyond Earth and after death? Is true magic possible? Secondary to these big-picture questions, I love building layers of fact and myth…every culture has its folklore, and therein can be found the secret narratives.”

“The Splintering Realm will also have extras, like the Lexicon from Aristorn sa Amontyr (Librarian of the Elder Race), and readers will be introduced to that feline prankster of myth - Tabby Mittens!”

The Nosferu draw nearer to achieving their dark ends in the fantastic Realm of Weir, with Earth soon to follow. War looms across the ill-prepared Realm, threatening the eternal soul of every creature.

Human Kenneth McNary has been transported to Weir by the First Mother, tasked with uniting the Elder Race, and much more. Now, the Realm’s magic continues to dwindle and Ken is hunted relentlessly by the monstrous R’Kesh. To fulfill his charge, Ken has been gifted with armor and the ability to wield Elder magic, but both may consume him. With such burdens, can he reconcile his star-crossed love for the half-immortal Dalia? Can a mere human shift the balance of power among Gods in The Splintering Realm, or will the newly minted wizard fall before his enemies?

W.L. Hoffman is the author of “The Soulstealer War” series, as well as other fantasy and Sci-Fi stories.

Hoffman’s interest in reading was voracious from an early age. He received his BA in English from Duke University and attended English literature classes at New College at Oxford University in England.

Hoffman then obtained his JD from Cornell Law School. He edited and wrote as an associate on the Cornell International Law Journal and, between legal treatises, his dreams wandered into strange realms as he quested for life’s higher meaning. Thus was born the foundation for “The Soulstealer War” and a literary career, which both lingered until Hoffman left a successful law practice to explore new horizons.

Writing late night, after the work day ended and the children were asleep, the Realm of Weir flourished and characters blossomed into wondrous multi-layered reality.

Hoffman currently resides in central New Jersey with his wife and daughters. He enjoys spending time with his family, exploring mountain wilds, and telling tales to the next generation of dreamers and writers.