Editor’s Corner: Connotation Is Just as Important as Denotation

Home > The Editor's Corner > Editor’s Corner: Connotation Is Just as Important as Denotation

connotation¹
a : the suggesting of a meaning by a word apart from the thing it explicitly names or describes
b : something suggested by a word or thing

It’s important for all writers to remember both the connotations and denotations of the words they use. Denotation is the word’s real meaning, its “official” definition, whereas connotation is what the word suggests, the sense of the word that is conveyed beyond the definition.

Think of the word “childlike.” While the denotation, or definition, is simply “resembling, suggesting, or appropriate to a child or childhood,” the connotation can mean everything from innocent to naïve to immature to simpleminded.

The key is in recognizing that connotation is not part of the “official” definition of a word. In this respect, it can be understood as something like slang or euphemism, but there is a distinction: In slang, a word is often used in a way that is completely different from its definition, whereas in connotation, the word has a slightly different shade of meaning—a coloring of the “official” definition (e.g., even though “childlike” has a variety of connotations, they all relate back to its denotation).

Further, the sense implied by a word’s connotation may be positive, negative, or neutral. This means that connotation can vary based on location and context (which can include current sociological, cultural, and political climates and events).
Real-Life Confusion of Denotation and Connotation

One real-world example of the need for remembering a word’s connotations is a sentence recently seen in one of our edits. The sentence stated that the sound of rain landing on a metal roof had a “tranquilizing effect.” The writer was obviously trying to use a specific form of tranquil, along with its connotations of calm, but in the minds of many readers, “tranquilizing” has a direct association with tranquilizers, which go far beyond calming and are used to incapacitate both people and animals.

For help with words that can cause confusion, writers usually turn to thesauruses as well as to dictionaries, both of which can be good about providing shades of meaning for words. Some aspects of terms, however, can’t always be properly conveyed in these resources. Additionally, words might have acquired new connotations since the thesaurus or dictionary was published.
Location and Context Are Important

Let’s look at some examples of how the denotation of a word can have a different connotation based on its usage, remembering that connotation can vary based on location and context.

First, for location, let’s consider the denotation and connotation of the word “winter.” The definition of this word is “the season between autumn and spring.” For people in the northern hemisphere, the neutral association of this word probably includes the months in which certain “winterlike” conditions are most common (probably December, January, and February). In more extreme climates, however, cultures may have developed negative connotations for winter, including darkness, along with extreme and bitter cold. In more temperate regions, however, winter may be positively associated with the release of oppressive heat.

Next, for context, let’s consider the potentially polarizing examples of liberal and conservative. First, their true definitions (in alphabetical order):

conservative
• tending or disposed to maintain existing views, conditions, or institutions
• marked by moderation or caution

liberal
• marked by generosity
• given or provided in a generous and openhanded way
• not literal or strict
• broad-minded; especially : not bound by authoritarianism, orthodoxy, or traditional forms

Today, each term has both negative and positive connotations, which vary based on the news and discussion circles in which they are used—and, yes, where they are used, as already discussed (i.e., what is considered extremely liberal in one country may be conservative in another) …

You’ve stuck with us this far, and maybe your head is spinning as you try to wrap your mind around connotation vs. denotation. But don’t worry! You don’t need to remember which is which—just that words have meanings beyond their definitions, and that those meanings can be different for different readers. 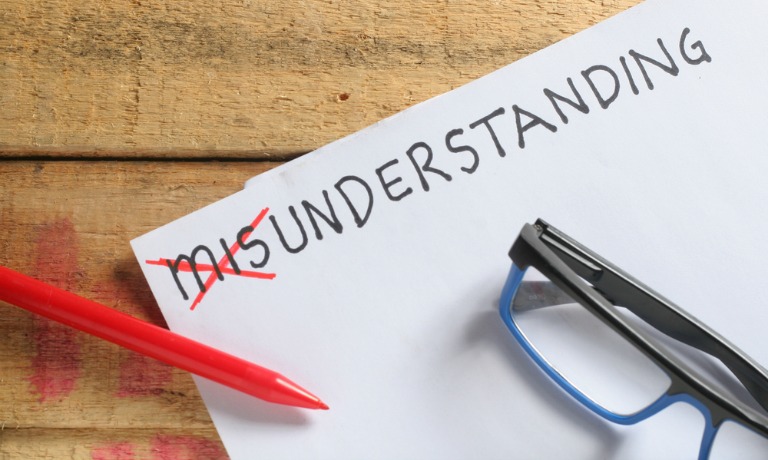 As Usual, Guard against Misunderstanding

This probably still leaves you with one question, though: How can you be certain that what you mean and what the reader takes away from the text are the same thing? First, use test, or beta, readers. We’ve discussed this in numerous Editor’s Corner articles , and we still champion the idea. Second, if the word you have chosen could be confusing to readers at all, you should consider either changing that word or using an additional adjective to help clarify the meaning. For example, in the case of a character described as “childlike,” readers will likely wonder if that character is innocent, naïve, immature, simpleminded, or simply young. The author can clarify by adding an adjective, making the meaning instantly clear: “James was childlike, innocent of the ways of the world.” Simple, right?

Mark Twain is credited with saying, “The difference between the right word and the almost right word is the difference between lightning and the lightning bug” (The Wit and Wisdom of Mark Twain). In order to ensure that readers will understand the message a book is trying to send, the writer has a responsibility to make that message clear. This may mean spending some added time with a thesaurus, a dictionary, and test readers, but the investment can pay off in spades when a book’s message sparks discussion and further study. Really, that’s the best an author can ask for: a book that speaks to the audience in a meaningful way and that readers are excited to talk about.