The Jolly Roger: An Airman’s Tale of Survival in World War II by William C. Atkinson

by Dog Ear Publishing |Dog Ear Featured Titles|July 27, 2015
Living, Loving, Learning in an Angry World b... God Is and Can Work Through You Too!: Testimo... 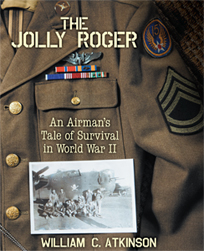 The Jolly Roger: An Airman’s Tale of Survival in World War II

“There were no visible flames, only intense, searing heat. At once, his entire flight suit caught fire, and with no conscious thought he reached for his parachute at his feet against the waist window bulkhead. Instinctively, he tucked it under his arms like a football and dove through the open window, the force of the leap tearing loose the attachments to the airplane of his headphones, throat microphone and oxygen mask.”

From The Jolly Roger

James C. Atkinson began life the descendant of an impoverished farming family in rural east-central Mississippi. While a high school senior, he enlisted in the U.S. Army Air Force and, like so many young men of his generation, left his home to fight for his country in WWII.

After a year of rigorous training, he was qualified as a Radio Operator/Gunner on a B-24 bomber, and what began as the adventure of a lifetime for Sgt. Atkinson, ended in horror and tragedy in the war-torn skies over Ploesti , Romania.

Though this is Dr. Atkinson’s personal story, it is not unique. Rather, it is representative of the stories of legions of young men from the Greatest Generation who would face the challenge of rebuilding their lives after rising from the ashes of the most destructive war in history.

William C. Atkinson is a Physician Assistant in Orthopedic Surgery, an instrument-rated private pilot, former off shore sailor and avid fl y fisherman. He is a student of WWII history and a WWII aviation enthusiast. He lives with his wife, Patty, in Lafayette, Louisiana.